The only thing that makes “Brothers Grimm” a bit interesting is its fairytale theme.

“Brothers Grimm” is shallow, bland, and disappointing. It is a fractured fairy tale that is unable to live up to its classic sources. There have been a few sparks of promise, but the muddled plot messes up its supposed intensity.

Weaving throughout the film are a number of Grimm tales including: “The Little Red Riding Hood,” “Hansel and Gretel,” “The Frog Prince,” “Rapunzel,” “Sleeping Beauty,” “Cinderella,” “The Gingerbread Man,” among others. But unfortunately, the outcome turns out as nothing more than a topsy-turvy showdown of folklorish adventure lacking good plot structure.

Utilizing the enchantment and whimsical tone of a fairy tale movie usually makes a playground for picturesque cinematography and production design. In this offering, the camera work and lighting design turn out stunning in many scenes. The costumes and set design complements the historic details of 1804 Europe when Napoleon was at the peak of his powers and the continent was under French control. However, mosy CGIs look too transparent, some sceneries show much of the paintings, and the overall treatment lacks ingenuity.

The narrative revolves around a very loosely based story about the authors of the many classic fairy tales that enchanted many generations of children around the world. The legendary German brothers Jacob (Heath Ledger) and Wilhelm Grimm (Matt Damon) travel from village to village pretending to protect the people from enchanted creatures and pulling off exorcisms. One time, they encounter a real magical curse in a haunted forest that takes them into a series of mystical adventures. The magic that confronts them rattles their beliefs and convictions. Will is the lover and realist, while Jacob is the dreamer. They are sent by the French General Delatombe (Jonathan Pryce) to the countryside to rescue the young, pretty girls who are mysteriously disappearing. 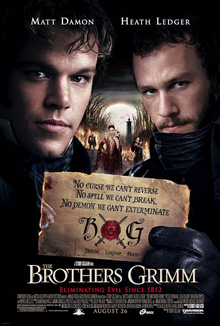 The main weakness of this fantasy flick lies on the script and storyline. The plotpoints feel disjointed. The narrative tries hard to weave the various fairytales into one cohesive film. The tone keeps shifting unevenly because of raw characterization and moments of fading cinematic vision. It is like inventing without any scientific method.

The movie is meant to be within the mainstream formula, yet it has no place even to the very basic equation. There is a daring vision challenging such a concept, but execution is rather disappointing.

“Brothers Grimm” does not pay much attention to the one vital thing: storytelling. It doesn’t get the viewer involved. Characterization is unclear and many questions about the happenings in the story are left unanswered. The tale is unable to create any form of empathy for the protagonists or for any character in particular.

Damon’s acting disappoints and he even loses hold of his supposed accent at times. Ledger is quite okay as he radiates his geeky and dreamer character through his facial expressions. Angelika (Lena Headey) turns out to be the most charismatic character in this movie. General Delatombe (Jonathan Pryce) is a bit too exaggerated without validating the too effeminate movements within his psychotic and military stance. Cavaldi (Peter Stormare) is half-cooked — sometimes funny, sometimes annoying or even irritating. Monica Bellucci radiates such beauty and flair as the evil mirror queen trapped in a high tower.

This motion picture seems like an unintelligible spoof of various fairy tales. Many established points in the story are left out like a disappearing Cinderella couch turned into a pumpkin. Some facts are not very intellectually nor artistically written. Loose ends in the narrative remain untied — things get pushed too hard just to put in the “mirror, mirror on the wall” elements.

What seems like the very curse of this cinematic venture is the lousy special effects and trying way too hard to put together the fairy tales without contributing better quality to the story. It attempts to chase its own plot out of nowhere.

“Brothers Grimm” can rarely be a kid’s favorite; it won’t entice teens and adults neither. Only viewers who are fine with over-the-board CGIs and inconsistent storytelling for the sake of getting that feel-good ending would find it worth some time to spare.

Too bad, the concept could have won the hearts of fairy tale movie lovers. Instead, this picture just merely leaves an impression that only a small portion of what the audience has dreamt about becomes a convincing cinematic reality.