This is a Disney hybrid superhero movie: “The Incredibles” meets “X-men” via “Harry Potter.”

If you think Hogwarts is the only secret school for extraordinary kids, well there’s also the heroic children’s world of “Sky High.” This film is a hybrid superhero flick: “The Incredibles” meets the “X-Men” via “Harry Potter.” It may be a Disney flick with a big celebration of superhero cliches; but it is entertaining enough for its target market. As a derivative, it never claims to be genuinely superior to its more successful blockbuster sources. Despite having a mediocre and formulaic script, it still turns out as an engaging family offering.

Exploring the lives of emerging superheroes during the time called “coming of age,” this lightweight adventure dwells into the themes of puberty, popularity, and family acceptance, as the kids try to live up to the issue of celebrity parents who clearly excel at their chosen professions and expect each of their children to excel in the same field as well.

The story builds up at a secret school up in the clouds named Sky High, an elite institution for children with superhero parents and/or superpowers. The freshmen group rides a bus towards the campus and gets a sight of cool gadgetry and awe-inspiring superskills amidst some parental battles, peer pressure, and teenage love moments.

These teens are at the peak of discovering their superpowers. Inside their cloud-floating campus, students seen include a rock monster, an acid spitter, a glow-in-the-dark boy, a vegetation commander, a beautiful and popular senior technopath, two bullying boys with superspeed and superelasticity, a snooty cheerleader, a dangerous rebel with flammable arms, animal-morphing, beach ball-morphing, and puddle-morphing kids, among others. Further exaggerations are seen with their professors, which include the forgotten-sidekick and formerly known All-American Boy who is now the dorky mad science teacher with a gigantic brain. 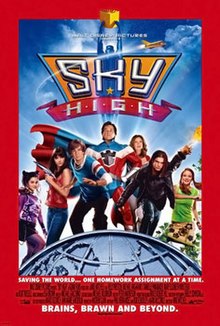 Living up to people’s expectations, Will Stronghold (Michael Angarano) is pressured by the fact that his father, the Commander (Kurt Russell), and his mother, Jetstream (Kelly Preston), are the world`s most legendary superheroes.

At Sky High, the freshies are divided into two classes by a cruel gym teacher (similar to Hogwarts’ Sorting Hat): the Heroes and the Sidekicks/Hero Support. Initially, the mundane Will joins the ranks of the Sidekicks as a late bloomer who apparently shows no signs of special powers inherited from his “rockstar parents.” Upon hitting the peak of his superhero puberty, he finally inherits his dad’s colossal strength and even his mom’s ability to fly. His outcast days are over as part of the Sidekick class whose gifts are not adequately impressive, as far as the school standards are concerned. As the inevitable villain plot endangers Will’s parents and the whole of Sky High, he and his teenage superfriends consisting of freshmen sidekicks plus his former arch-rival Warren Peace (Steven Strait), take the hero’s path to save Sky High.

The movie kicks off with bright, comic-strip panels and tries to wrap up in the same way. It is a combination of mild teen melodrama, quirky characters, and superhero fantasy revolving around the tragedies of high-school life. The discrimination within the superhero hierarchy (heroes and sidekicks) involves both emotional and practical concerns. It manages to put some undertones in catchphrases such as “hero support.”

Scene transitions feature the classic use of tilted camera shots and contemporary B-movie style CGIs to heighten the movie in a not so distracting fashion. Effects are seemingly spent within a limited budget — having no big-time intro and finish to boast of. Ironically, this works for this picture’s advantage, as there is no much distraction from the plot mechanics. The superhero costumes are deliberately “action-figurey.” The script is completely dependent on formula, superhero conventions, and standard teen movie cliches. Yet, its undemanding tone gets a certain charisma for the enjoyment of its targeted young viewers.

“Sky High” crosses the superhero saga with a kiddie-flick charisma designed to bring delight to the undemanding young ones. Overall, it is a bright, fanciful, and warm-hearted flick fit for a family day.