Skip to content
You are here
Home > Film/Art > Action > ‘Ong-Bak’ Film Review: No doubles, no strings, no CGIs

“Ong-Bak” amazes and defies the Hollywood cheats of stunt doubles, using CGI and animation, and working on strings while shooting on chroma to let the characters’ actions fly and soar high. This action fare shows the real deal — what a premier martial artist can really do without resorting to any of action cinema’s magic tricks.

The film presents the centuries-old art of Muay Thai in a contemporary scene. It carries on the Thai people’s culture and traditions, as inspired by their ancient fighting spirit. Muay Thai transforms the human body into a multifaceted weapon for close-combat fighting. The way it is presented on screen allows it to work as a newbie’s primer on techniques to hit people with the elbows, arms, knees, and feet through conceivably defensive stances. Moreover, this motion picture exposes the deep spiritual training involved in the serious practice of Muay Thai.

More than anything else, what strikes most in this movie is not the story, script, or acting — it is clearly the symphony of flying bodies, breaking bones, and elaborately staged chasing scenes.

Ting (Tony Jaa) defies gravity and challenges physics with his authentic fight moves. He leaps over cars, two intersecting bicycles, market stalls, and he even jumps on top of people’s heads. He slides under a moving truck and runs and escapes through a large coil of barbed wire. Ting keeps the hype strong throughout this motion picture’s running time. All his fight scenes are simply jawdropping. They are all spectacular enough that viewers would probably ignore any possible flaw in the movie. His awesome stunts put life to a considerably lifeless or less of a life type of story, which unimpressively utilizes the overused plot of a hero finishing what the bad guys started. Things could have been really dragging early on, but seeing Ting outrunning gangs in strictly designed obstacle courses placed in everyday Bangkok’s busy streets is really quite a treat. 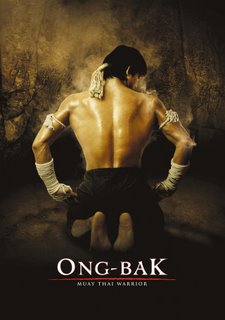 The story is very simple. There are no much complications on the storyline as the ultimate goal to finish the main character’s mission is very clear. There is no time for romance or any fuss about the material world — just bring back the sacred statue using the art of Muay Thai.

The opening sequence of the tree-climbing contest sets the pace for this Asian action flick. It fills every frame with impressive camera movements that take advantage of all those kick-ass stunts.

The take-off of the story happens when the ancient Buddhist statue Ong-Bak gets stolen. The town’s hero Ting is bound to bring back Ong-Bak’s head. He maintains a clear heart and mind to not fight for the reason of vengeance, money, or personal gain, but only to retrieve the statue. He vows to become a monk upon the statue’s return to his town.

For the story’s antagonist, the attempt to promote the metaphor of being a god and stealing the head of a town’s god through the local crime and drug lord generally works for the narrative. The idea that he has the money and power to control and dictate who he wants dead and who he wants alive validates his dialogue of being the true evil of a god himself.

The reddish tone on the colorgrading works for the picture’s overall visual requirements. The dynamic camerawork remains raw in the final presentation with the exception of the use of basic slow-motion and fast-motion effects. Car mounts are properly used for the elaborate chasing scenes.

While there is clearly no budget alloted for hard-core visual effects, a big portion of the budget goes to the practical effects of burning cars, falling three-wheeled Thai vehicles, destroying market stalls, and pounding bottles, chairs, tables, and even lamps and appliances. A huge chunk of the budget may have also been used in making a number of giant statue heads, which are mostly shot underwater and in a cave.

The rawness of what is captured during the principal photography aptly fits the action-packed sequences. However, some scenes suffer from too choppy editing that, if not for the extraordinarily striking moves of the main actor, audience engagement would readily spiral down.

The question of using guns against Ting, like in the cave sequence, remains a bit of a pitfall in the tale’s realistic treatment. This is obviously incorporated into the plot to control and contain the action scenes in favor of hand-to-hand combat.

One interesting fight scene that is definitely worth mentioning features Ting catching fire on his legs, then he attacks his opponents with his blazing legs.

Martial arts enthusiasts can get a lot from Jaa’s moves. With awe-inspiring action amidst the not so compelling story, the authentic fight scenes really make this movie worth the price of admission.

“Ong-Bak” is a breath of fresh air from the usual Hollywood action flicks, which are merely reliant on quick editing, stunt doubles, and special effects. Watch this for the action. Indeed, it’s worth it.

This article was originally commissioned for Yehey! in 2006.