Skip to content
You are here
Home > Film/Art > Adventure > ‘Into the Blue’ Film Review: Soaking deep into the blue

“Into the Blue” is sizzling hot with bikini bodies and uncompromising Caribbean sceneries — but that’s about it.

“Into the Blue” runs out of air with its contrived plot and its mere interest on showcasing sexy bodies on screen. This Hollywood flick sinks aimlessly into the deep waters of the Bahamas.

Director John Stockwell seems primarily concerned with the superficial side: showcasing the major characters in a bikini fashion show and making a high-end audio-visual presentation illustrating the beauty of nature like what can normally be seen in travelogues and travel channels. On the one hand, it is commendable for its stunning aerial and underwater cinematography. 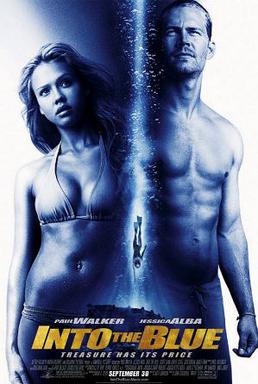 It is rather disappointing that the movie merely depends on the great sceneries and the sexy bodies. It is quite preposterous that the presentation of almost all the possible criminal threats and underwater hazards — including the deadly sharks being taught to munch only the villains — resort to a series of silly fight and chase scenes where all the bad guys easily get dismissed while the protagonists always get miraculously saved. The plotpoints focus on too much chases and getaways than giving the story enough depth.

The story explores a treasure hunt adventure of a group of diver friends and lovers finding themselves in trouble after discovering, more than a pirates’ ship of treasure, a drug lord’s illicit cargo from his sunken airplane. Jared (Paul Walker) is a diving instructor and Sam (Jessica Alba) is a trainer at a sea park in the Bahamas. But like everyone else, they both dream of finding shipwreck treasure to change their simple lives. Bryce (Scott Caan), along with his new party girl date Amanda (Ashley Scott), enters the picture and complicates the situation.

Any supermodel or bikini hottie can take the place of Alba in this movie. Unlike most of her previous films, this one is entirely a non-challenging role. Walker needs to improve on his acting. Caan is effective as the desperate Bryce and Scott gives a convincing performance as a party girl taking the pleasure for high-class lifestyle.

There are so much clichés in the narrative, including the characterization of the antagonists, which are all clearly based on stereotypes. The tale is unable to dig much dramatic treasure out of the issue of a cocaine-filled plane that makes the divers and the bad guys going gaga over it. After several minutes of enjoying the great ocean sceneries, there is nothing more than the sharks and the guns trying too hard to push the story from one plotpoint to the next.

Disregarding the contrived plot and the poor storyline that makes this movie fall mercilessly into the pit of a pathetic visual caravan, this scuba flick is totally “for visual spectacle only.” It is ultimately for those who simply seek pleasure in seeing the oozing hot bodies of Alba, Walker, and the rest, or maybe enjoy the luxury of seeing the gift of nature within the deep oceans over and over as a form of mindless popcorn entertainment.