“Transporter 2” maintains the typical formula: the good guy chasing the bad guys. Its B-movie plot twists are like an assemblage of action-sequel clichés carefully endorsing the car brand Audi.

The opening scene plays like an Audi commercial. It takes full advantage of the all-wheel drive to survive countless incredible stunts. The car is so sturdy that after crashing and jumping from one building to the next, not even a scratch can be seen on it. 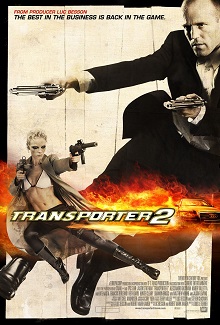 Statham delivers an effective role with his silent charisma as Frank Martin. This makes up for his taciturn personality as a man whose emotions seem so well under control all the time. Alessandro Gassman turns out as a sexy villain.

Matthew Modine effectively plays the role of a bureaucrat. So does Amber Valetta as a suffering wife and a loving mom. Kate Nauta plays a violent vixen who has fetish in killing mercilessly with her two big toys and her countless bullets — and getting the high on her smudged eye make-up. Francois Berleand plays as the film’s comic relief and as a sort of accomplice to Frank.

This fast-paced motion picture is a hit and miss — at times heart pumping, at times braking on the needed suspense. There are pleasurable shots of Miami, but the stunts turn out too outrageous at times, making the audience lose the enjoyment for the sights and scenes. The B-movie elements are considerably fine for the usual expectations, but much of the action parts lead to the inability to provide enough pauses to let the viewers catch their breaths. With too many action spectacles in the presentation, it gets to the point that one doesn’t get to appreciate much of the special effects anymore. A number of story details are also exposed and resolved rather too easily.

If looking for a believable plot, “Transporter 2” is too far an outlandish, over-the-top flick. But despite the serious flaws and plot issues, it is still fun and silly on its antics, especially if one suspends the disbelief on its rather impossible stunts. In such case, one can better enjoy the ride.