Skip to content
You are here
Home > Film/Art > Adventure > ‘The Sisterhood of the Traveling Pants’ Film Review: A travelogue drama

This movie features a heartwarming episodic tale of four best friends and their adventures from miles away.

At first, this teenybopper movie may seem like a typical adaptation riding on the popularity of the young adult book and best-selling novel “The Sisterhood of the Traveling Pants” by Anne Brashares. Apparently, it’s a heartwarmingly episodic travelogue drama featuring four best friends spending their first summer apart and sharing a magical pair of jeans fitting each of them perfectly — despite the differences in their body frames. To keep in touch, they pass the so-called magical pants from one person to another, alongside the adventures they go through while being apart.

The narrative centers on the tightly knit group of the four girls Lena (Alexis Bledel), Bridget (Blake Lively), Carmen (America Ferrera), and Tibby (Amber Tamblyn). Their young lives have been brought to a great friendship since their pregnant mothers’ bonding at the same Lamaze class; yet, they are actually a set of opposites both in looks and personalities. The real magic between them turns out to be the true friendship bonding them as sisters. 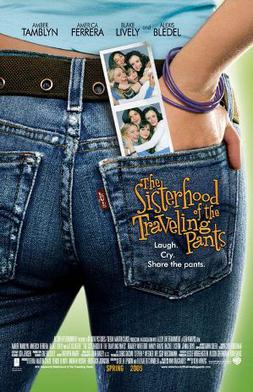 Lena is a quiet, inhibited, and compassionate artist. For summer, she visits her grandparents in Greece and meets Kostos. Their love story features a familiar Romeo and Juliet plot.

Bridget is a beautiful blonde, tall and athletic. She travels to Mexico, taking a ride to a soccer camp via a Quetzalcoatl Express bus (establishing the Central American place Quetzalcoatl which is known for the Aztecs and the Mayans as a Mesoamerican God). She falls in love with Eric, one of the coaches in the camp, and comes off as an overconfident hottie trying to fill the void in her life after losing her mother.

Carmen, a Latina street-smart talker, visits her dad in South Carolina and attempts to improve her relationship with him. However, she finds out a shocking secret she is not ready to deal with.

Tibby, a young, struggling filmmaker, remains at home and takes a low-paying job for the summer at a suburban store where she plans to shoot a documentary about life and work. She keeps every bit of her individuality, explores her creative freedom, and befriends a young girl named Bailey for her film.

Although Lena has the most picturesque visuals in Greece and Bridget follows as the runner-up who gets “fun and physical” in Mexico, the movie’s more emotionally involving subplots focus more on Tibby and Carmen.

Amber (Tibby) gives the strongest performance here. She exudes a cold, non-conformist personality that cracks into heartbreaking bits while finding the true meaning of life on and off the camera. America (Carmen) plays next in line as the flabby Latina confronting her life issues as a broken family member.

The film’s opening billboard aptly sets that girly mood — turning introductory scenes into magical moments, moving on to rides in great places, and journeying around the values in young adult friendships. However, there are some flaws on the continuity and the accuracy of sending the pants to different couriers in the narrative.

The characters’ strengths and the actresses’ chemistry give heart to this coming-of-age tale. They grow up learning more serious things in life, while trying to come to terms with adulthood.

“The Sisterhood of the Traveling Pants” is not meant for the art-house fans. It shares flaws in terms of script and technical matters. Yet, it has enough heart for its target audience through that dose of drama masked in the youthfulness of its characters.