Skip to content
You are here
Home > Film/Art > Adventure > ‘The Island’ Film Review: On harvesting humans

Set in the year 2019 in a hermetic complex where everyone wears white suits and their health and food intake monitored up to the tiniest details, “The Island” follows the everyday life of Lincoln Six-Echo (Ewan McGregor) and Jordan Two-Delta (Scarlett Johansson) living in a sterile environment after a world contamination.

This derivative science-fiction thriller puts the spotlight on human clones used as spare parts to replace defective body organs, adopt newborn babies without any biological parent running after the kid (and they can even have kids by using specific clones), and insure lost or malfunctioning body parts of their sponsors who are mostly supermodels, athletes, politicians, and billionaires.

The said clones are believed to be fortunate survivors of a world contamination. However, by the middle of the story, chunks of information about the underground complex they live in get revealed. It turns out that the said futuristic environment is a top-secret facility run by the corporate smug Dr. Merrick (Sean Bean) who grows clones and raises them as products being prepared for harvesting. Soon, they will be ready for consumption by their sponsors who have problems with their specific body parts. Clearly, this tale talks about the dark side of human experimentation. 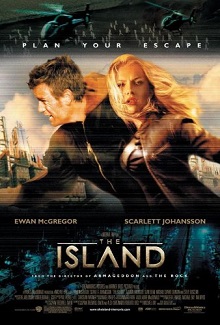 This sci-fi adventure movie seems to pay homage to the futuristic stories of the past like “Logan’s Run” and “Coma” of the 70’s and 80’s.

The colors are very saturated and futuristic. The whites (particularly the white suits inside the sterile clone town) look cool and neat. The blue seas seen in the tight and compelling opening scene and the holograms of The Island offer great visual appeal. Michael Bay, as usual, takes his shots action-packed Hollywood style, that Bay-Bruckheimer style (Bruckheimer being his mentor) as seen in the films like “Armageddon,” “Pearl Harbor,” “The Rock,” among others.

Though the movie’s plotpoints are very fictitious, “The Island” takes an uncompromising stand against the vegetation of human clones and human harvesting.

As the inquisitive mind of Lincoln pushes the story forward, he escapes with his love interest Jordan from the hands of Dr. Merrick who runs the cloning research institute and masks himself as the clones’ trusted shrink. Through the help of Steve Buscemi’s character, Lincoln and Jordan discover the nooks and cranny of things: the why’s and how’s of them having cushy lives inside a sterile space filled with white-clad inhabitants; the truth behind the lottery; the much revered utopian island; and the unlikely vegetative state of the new clones inside a lab.

After living all their lives inside their antiseptic underground prison, Lincoln and Jordan could have had more comic interactions during their fresh moments in the real world. But Bay focused most on the chasing scenes, which is quite normal for him and for the genre. However, some possible hits on the comic side of things are actually missed. Such could have added more spice to the story — including the main characters’ first time in bed.

The speedway chases are typically Hollywood mainstream. Digital effects, massive sets, great stunts, futuristic elements, fight scenes on freeways and airways, and train wheels on a big rig turned into resourceful weapons clearly prioritize the viewers’ thrust for speed and action. McGregor wrestling himself is a good buy, thanks to the use of motion-control cameras.

This picture boasts some big-time product placements including those for Puma and Microsoft.

“The Island” taps well into the intriguing concept of what technology brings to humans. The plot and the story are mix-and-matches of various sci-fi hits and not so hits.

It is a universal thing: humans want to live longer. Humans don’t get contented of what they have. But up to what extent should anyone keep up with these? This tale serves as an eye-opener on “how human” human beings can be and should be. Somehow, the narrative makes a stand against this kind of human harvesting as it treats humanity as nothing more than a piece of meat.

Humans need purpose in their lives. This cinematic offering reiterates how far issues like such can be raised — and warn the society of the possibilities that cloning awaits. With better storytelling and not prioritizing mere visual flair, this movie could have been more purpose-driven, while still keeping up with the need for fun, quality, and meaningful entertainment.