The film opens with a horror feel crawling into its slowly unfolding love story — musing into a suspense-filled route that somehow extends to the issues of the paranormal. A touch of horror gets injected every now and then.

The plot takes on different hues and dimensions for the usual love-triangle fare. Filled with metaphors, finely orchestrated camera movements, and breathtaking visuals, the film’s heaviness works well through the cinematography and acting performances. Many visual elements absorb deep-rooted emotions, which are often troubling, secretive, mysterious, violent, or painful.

The narrative revolves around the three adoptive children of two spinster sisters. An epitome of a happy, religious, and conservative family from the outside, this unique family set-up is filled with repression and tragic memories from the inside. Family complications, jealousy, and revenge try to tear them apart. The composite world the two sisters created for their three adoptive children becomes a contrived space of fragility and emotional disturbance of varying magnitudes.

The screenplay by Ricky Lee and Rafael Hidalgo, as well as the direction by Cholo Laurel, offers convincing justification on what happens in the narrative. This cinematic offering’s direction provides rich characterization for the ensemble cast. Each major character is well-crafted both inside and out. On the physical, emotional, and psychological planes, the viewers can see through each one’s perrsona. The gray characters aptly contribute to the story structure’s suspense and complications. 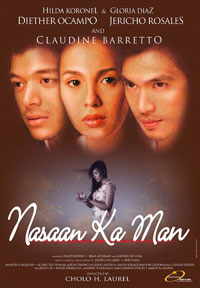 The quirky Trining (Hilda Koronel) is a slightly deaf character whose passive bearing to her sister’s authority inside their prison-like home becomes a source of comic relief for the serious tale. Lilia (Gloria Diaz) in her domineering old-maid stance covers up her sadness through her flair for make-up. Pilar (Claudine Baretto) initially radiates a loving and innocent nature until she transforms into a confounded, fear-stricken woman. Her opened third eye and her being a product of sin and violence become part of the family’s deep secrets. Joven (Jericho Rosales) with his kind, introvert bearing as the outcast adopted child ironically grows up filled with inspiration and thoughtfulness through his love for Pilar. Ito (Diether Ocampo) as the overprotected adolescent son finds himself in jealousy and trouble as his repression from his silent obedience to the rules of the house gets the better of him.

Pilar and Joven fight for their love until they are finally granted the family’s blessing. Ito, totally-wrecked by this, gets his revenge by violating Pilar. Trining is sympathetic to Pilar’s plight, but Lilia is more concerned with his favorite son Ito. The deliberation among them becomes a realistic reflection of how it goes within a typically conservative Filipino family in such turmoil. As the story progresses, Ito rages further as he knows he really can’t own Pilar’s heart. Soon, violence causes further tragedy in the family.

There is parallelism between the fate of the spinsters and their adopted children. Though there are some questions on the believability of the storyline, the suspension of disbelief in the turn of events works beyond the issues of realism and paranormal insights.

Baretto delivers a complicated and delicate portrayal as Pilar. Her rape scene is quite gripping. The tight and distorted shots greatly contribute to the story’s heavily emotional moments. The said scene deliberately gives the worst feeling for the viewer. There is enough room for steady development with the dynamics between the sibling characters of Rosales and Ocampo. The chemistry between the spinster sibling roles of Diaz and Koronel effectively utilizes silence and shock to push the material further. Irma Adlawan’s character as a blind helper with an opened third eye and Katherine Luna as her daughter who turns out as a willing victim at a certain point in the tale both become the weaving factors in the narrative.

The picture is filled with a number of intense scenes of romance, argumentation, and fighting. The love scenes are passionate and gentle. The dramatic scenes are subtle and sincere. The violent scenes are painful and suggestive.

Even with consideration to the film’s cinematic license, the scene where Pilar is asked to check the fuse after a blackout while suspense on Ito’s revenge is at its peak still feels quite forced into the story just to get her into a dark spot alone. This becomes more unbelievable as a sane person in danger won’t choose to check the fuse at such time and would rather choose to save his or her life, or at least prioritize being on the safe side, especially during a clearly compromised situation.

Although most of its twists resemble those of many thriving Hollywood offerings, the film’s storytelling maintains a well-handled exposition for the most part.

“Nasaan Ka Man” is emotionally tying and it won’t give that feel-good mood after watching. Yet, even with a considerably depressing ending, this motion picture is a must-see for those who can take a certain form of heaviness in a cinematic piece. Amidst its story loopholes, it can still work well for those who prefer pondering on what life has to offer and how people should value things and situations given to them or are still with them.