“Lucky You” straightforwardly shows the grueling world of gambling and betting as the various characters inside this realm create a whole new world of their own.

While within the high-stakes backdrop of Las Vegas, this motion picture brings the audience a gist of sub-stories about human relationships, inhabiting a number of snapshots of personal dramas that unfold in every laying out of the cards.

Set in the gambling world of Las Vegas, this romantic drama tells the story of Huck Cheever (Eric Bana), a happy-go-lucky bachelor whose life revolves around the green felt poker tables. In between his games, he also confronts his personal conflicts including his problematic relationship with his father.

The film gives a gist of how poker works. It makes the game look generally interesting and less “sinful.” However, it is worth noting that this is not the type of movie to offer informative poker basics for the uninitiated. For somebody not knowledgeable in playing poker at all, it would be hard to catch up with the mechanics of the game while watching.

The front story is clear — Huck is a hotshot poker player whose emotions at the table often gets the better of him. Despite his really exceptional skills, he is unable to focus every time he goes head to head with his estranged father L.C. Cheever (Robert Duvall), a living legend in the poker world and a two-time world champion. While living a life without clear direction, he meets the struggling singer Billie Offer (Drew Barrymore). From then on, he finds himself something to be busy with other than poker.

The boy-meets-girl premise clearly features a romantic tale in the making. Within the movie’s physicality lies a character-driven flick based on widely used Hollywood conventions. 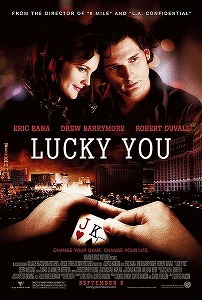 Huck deals with life through his instincts. This enables him to take advantage of his opponents at the poker table. Meanwhile, Billie uses intuition to see the truth and sympathize with what she sees around. As they fall in love, the turn of events shows how their instincts play big parts in their lives. However, their biggest difference becomes more apparent: Huck is a very talented man who uses his instincts to win the games while expertly avoiding emotional connections and long-term commitments at the same time; while Billie lacks talent but she uses her instincts to open her heart while becoming emotionally connected for the sake of what is right and what is good. These two people who are clearly looking for better lives try to gamble for love in a narrative filled with drama, humor, and metaphors.

The characters inhabit certain personalities while following the tried-and-tested mainstream formula of the main character overcoming adversity and succeeding in the end for that feel-good effect. At some point, the picture tries to cut the predictable formula by turning a bit away from its exhausted twists; however, the mere breaking of it still turns out too cliched and quite syrupy.

With “L.A. Confidential,” “Wonder Boys,” “8 Mile,” and “In Her Shoes” under his belt, director Curtis Hanson tries to keep the characters rich enough for the viewers to follow their whereabouts. Working with scriptwriter Eric Roth, the man behind the Academy Award-winning script of “Forrest Gump,” he tends to make the general interior scenes within the poker tables and well-lit hotels and casinos interesting enough for big-time and real-life gamblers and for those newbies curious about the gamblers’ domain.