“Let the Love Begin” is GMA Films’ comeback project after a four-year hiatus.

The film outfit’s last movie before it was the 2000 picture  “Death Row.” Prior to this, they produced a few other projects including “Jose Rizal,” “Sa Pusod ng Dagat,” and “Muro Ami” — all of which were given due credit by a number of award-giving bodies. But this time, GMA Films comes back with a light love story that is quite different from its usual roster of cinematic offerings.

“Let the Love Begin” hangs on such a simple premise that is pretty much scripted into contrivance throughout. The story spans a very long time frame and the way the scenes unfold on screen doesn’t employ much credibility. Except for the fresh faces, everything looks recycled. It’s the same old story, same old elements, same old formula. The movie presents generic dialogue with highlights including a dramatic scene with that all-too-familiar-looking rain effect.

The conflict involves parents who are against their children’s romantic engagements. Not to say that these would automatically render any movie worthless, but the fact that it doesn’t add any new flavor or statement to at least put a bit more flair to the storytelling, this overused tale really looks so worn out — it is as if it merely relies on its bankable stars to get an audience. Perhaps…

The narrative traces the main characters’ lives from their high school years to their careers in the corporate world. Its straightforward love story features the usual poor-boy-meets-rich-girl tale. Eric (Richard Gutierrez), a brainy orphan raised by his grandmother (Gloria Romero), works as a janitor in a school where he attends night classes. Meanwhile, Pia (Angel Locsin) radiates an Elle-type of character in “Legally Blonde” less Elle’s intellect. Rich, spoiled, and more interested in gimmicks than studying, this “socialized kikay” is raised by her father (Tonton Gutierrez) and no information about her mother gets revealed in the narrative.

Their romance turns out as predictable as it can get. Then, from nowhere comes the text shown on screen saying “after five years.” Time suddenly passes by just like that. No creative or thematic transitions whatsoever. This time, Eric, still nursing a wounded heart when Pia studied in the United States, is still a janitor and he is working in Pia’s company. 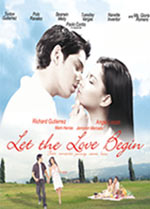 The movie’s second love story concerns Luigi (Mark Herras), a high-school playboy who ignores his tomboyish best friend Alex (Jennylyn Mercado). Again, time suddenly passes by just like that. No creative or thematic transition whatsoever. This time, after college, Alex blooms into an attractive young photographer and she wins the heart of the former womanizer Luigi.

This overly formulaic piece primarily shows a predictable series of events where slow-motion effects add that “pa-cute and pakilig factor” for the consumption of the main cast’s fans. In fact, the storytelling focuses too much on such that the script lapses and production flaws get worse as the story moves on.

The Tagaytay breather gives a light relief to the tiring and annoying elements in the movie. The “kilig factor” for the savior Eric and his beloved Pia fuel such a saccharine moment, particularly on the latter part of the narrative. To be fair to its being a clearly fan-made piece more than anything else, its mainstream ingredients are aptly engineered to make the fans swoon and scream, rooting for the love teams on screen as expected.

This fan movie is reminisent of the romantic offerings of the 1980s. It breathes life to its tired tale by adding a heavy dose of crowd-pleasing commercial elements for its intended audience.

Eveything in this rom-com flick, from the story and dialogue, to the shots and blocking, all work like a teenybopper TV episode expensively shot on 35mm film. Blocking problems abound. Bit players move back and forth at the background in unrealistic ways. There’s a man walking to his house, then he goes out, goes from one side of the frame to the opposite side at every cue, and so on.

A number of backgrounders, including one inside the church, look very conscious in every screen appearance. This goes to show that the production only prioritizes the main cast and those bit players serve as mere props on screen. In terms of putting value to film language, all scene elements big or small should work hand in hand in setting up the frame — or at least avoid the annoyance of seeing backgrounders uselessly walking back and forth in a continuous shot.

Actors just provide lip service with their speaking lines. Tension-filled and dramatic scenes don’t even make the most sensitive viewer get a faster heartbeat.

This movie has nothing much to offer for the evolving taste of moviegoers. Nevertheless, in keeping up with the tried-and-tested formula, this mainstream flick uses the chemistry between Gutierrez and Locsin in order to reach their targeted fans for that generic romantic ride.