Comic, satirical, and mocking in its style, “La Visa Loca” offers a dose of laughs and slaps for the Filipino viewers, whether they are on the nationalistic or pragmatic side of things.

This film explores the decision-making process in cases that involve one’s mind, heart, pride, idealism, and most of all, economic stability. Crafted in a light and subtle way, the story works on a simple premise, which clearly promotes a social commentary on how a number of Filipinos become fanatics of the relatively elusive U.S. visa. It has a distinct statement over the madness for that “greener pasture” in the land of Uncle John.

This motion picture features an interesting opening credits, which tastefully depicts how Filipino hopefuls pray for the precious stamp of approval at the U.S. embassy.

The cinematography, music, and editing generally compliment one another. Metaphors here and there present the picture’s satirical side. These include the scenes of a hardworking carnival mermaid and the parodied rituals and various types of fanaticism in the Philippines — the myths during the Holy Week and other religious and cultural beliefs, the Filipinos’ colonial mentality, among others. The irony in banning the eating of pork in opened beerhouses during the Holy Week says a lot about the narrative. Many speaking lines hit on small unresolved issues such as the banning of the use of the Filipino translations of penis and vagina in broadcast media. All these clearly give social commentary on the Filipino mentality.

Filled with gray characters that are finely stitched into an ensemble, the tale unfolds in a light and entertaining way amidst the heavy issues inside it. Director Mark Meily turns the characters’ flaws into comic fun without losing focus. Most of the major roles casually deliver the needed narrative punches. The father-and-son relationship between actors Johnny Delgado and Robin Padilla gets carefully molded along the way to validate the movie’s end. At some point, the emotions become overwhelming; the situation renders its own kind of redemption. Meanwhile, even with nothing much to say, the short but poignant mother-and-son look between Evangeline Pascual and Padilla gives enough connection without becoming too melodramatic and overacting. 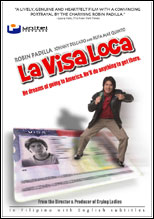 Paul Holme delivers substantial flair as the “Planet Strange” host Nigel Adams. With the things that happened to him in the tale, he gives enough credibility to his lines, particularly the wake up call to the Filipinos’ bad habits and colonial mentality, as well as certain citizens’ opportunistic attitude towards tourists.

Delgado in his DOM-type role justifies his character. The story says he is neither good nor bad, as he falls into the errs of being human — a victim of sacrifices and is left with even more sacrifices to come.

Padilla’s acting generally works. He serves as a personification of an ordinary Filipino trying to live up to the American Dream, while suffering from disillusionment in his own country. Yet, he offers an attempt to live up to a certain redemption of the Filipinos’ image and pride. He makes his own sacrifice for his country, and at the same time, just like his father, makes a sacrifice to attain his dream.

Ruffa Mae Quinto’s charisma adds to her character, but the so-so acting doesn’t add much to the storytelling.

The “pasyon” chorus adds a venue for style — in par with the Filipino elements such as the Kristos and the faith healers. Collectively, these serve as a counterpart for voiceover by singing out loud the comments for Padilla’s character. Although the film can stand without such, they add heart to the presentation.

The cameo roles seem to extend the fun the production had during the shoot. These cameos include actors and actresses Earl Ignacio, Bearwin Meily, Raymart Santiago, Eddie Gutierrez, Ricky Davao, and Evangeline Pascual, directors Andoy Ranay, Khryss Adalia, Quark Henares, and even Meily himself, cinematographers Jorg Schifferer and Lee Meily, and even the movie’s producer Tony Gloria. Interestingly, these appearances live up to the mood and mockery that this cinematic offering’s theme suggests.

In terms of gender sensitivity, it is quite disappointing to know that Padilla’s character as the personification of a Filipino trying to redeem his race remains the typical womanizer without any redemption in the end, as if somehow suggesting that all Filipinos play around the women in their lives. Further validating this concern are the portrayals of major female roles in the film — Pascual as an irresponsible mother and Quinto as a pathetic single mother who gets some help from an ex-boyfriend. So goes with that woman quarreling with Meily during his cameo, which involves that Las Piñas-Caloocan issue inside a cab. As a film trying to make a statement for a hopeful change in the country’s questionable mindset and attitude, it seriously lacks storytelling sensitivity when it comes to gender concerns.

The ending is quite predictable. Nevertheless, it remains valid for the story’s needs. The picture’s style, look, and temperament are often times appealing. As a comedy carrying a load of heavy issues in it, it is expressively fun, witty, and meaty enough for its intentions. In between its imperfect moments, it provides some carefully orchestrated elements meant to strike the emotions of the general audience.