Skip to content
You are here
Home > Film/Art > Adaptation > ‘In Her Shoes’ Film Review: More than just a chick flick

This movie is an interestingly profound and complex story about different relationships: familial, friendly, romantic.

“In Her Shoes” features a decently textured narrative about the reconnection of two estranged sisters who have nothing in common but their shoe sizes.

Offering enough depth, the story is not just about a simple issue on sibling rivalry made into a rushed script. It becomes more than a show-off of Hollywood stars ramping fashion clothes and blobbing about some insensible girl talks.

This chick flick, based on Jennifer Weiner’s best-selling work, is a tale about how the past complexities of ruined family relationships try to seek closure on what’s been left hanging for the longest time. With sincerity, wits, and humor, this motion picture provides a moving effort for its intended audience. 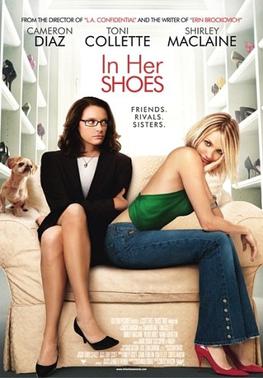 Rose (Toni Collette) is the older sister, a Philadelphia lawyer who buys expensive heels as an outlet for her depression and insecurities. Ironically, she never thinks of wearing them at all. Her lack of confidence, especially with her physical features, made her an introvert. She is a lover who can’t have sex with the lights on.

Maggie (Cameron Diaz) is the younger sister, a consummate party hottie who remains immature and dependent for her age. She always seeks financial support from her sister, father, and friends to continue her girls-just-wanna-have-fun life. She regularly steals money and things from her sister and covers up her hang-ups in life by maintaining her oozing sex appeal, conspicuous looks, and party-going life amidst her unemployable stature.

The two sisters share the agony of their mother’s untimely death, as well as the anguish of having a father (Ken Howard) who has kept too many secrets about delicate family issues ever since. He gives more attention to his second wife, a pretentious stepmother to Rose and Maggie.

After the pain of seducing her older sister’s boyfriend, the sisters’ already unstable bond readily gets cut. Knowing that she has nowhere else to go, Maggie sets off to search for her long-lost grandmother Ella (Shirley MacLaine), an extended family member she has never known. Maggie finds her in a Florida retirement community and tries to take advantage of her for her own financial needs. Later on, she gets convinced to work as a caregiver for the aged. Mean time, Rose gives up her work and starts walking dogs and losing some weight. She falls in love with Simon Stein (Mark Feuerstein), another lawyer who has been in love with her for years.

From these experiences, the two sisters start to grow as real and learned people facing their greatest fears and insecurities and further discovering their strengths through them. Eventually, Rose tracks Maggie down to Florida, where both sisters and their grandmother try to recover the decades lost in their hampered family relationships.

The characters have good chemistry. Touching sequences are very much apparent in the Florida retirement community where supporting and minor characters breathe new life to the portrayal of senior citizen roles. Director Curtis Hanson’s tear-jerking moments are not too melodramatic and just have the right taste.

Diaz gives justice to her mundane-loving, parasitic sister role. The scene where she struggles with her reading disabilities while taking care of an old man and ex-professor gives the right build-up of emotions. Collette suits the intellectual but insecure personality of Rose’s character. MacLaine and Howard give effective supporting roles as well.

Although the theme discusses a serious subject matter, the humor in the storytelling makes the movie a manageable tearjerker.

The metaphor on shoes generally works. But at some point, it gets slightly overused that the utilizing of shoes in the storyline already becomes too direct, too literal, and just way too much.

A funny and warm depiction of familial relations, ”In Her Shoes” starts out as an ordinary picture that moves on to become a touching, character-driven melodrama with a touch of good humor to lighten it up. Its characters feel like real people. The strength of the movie is its heart for the audience. Overall, the narrative can easily put them in the characters’ shoes despite some lapses in the storytelling.

As a whole, this movie works as a truthful, moving, and enjoyable fare for those who enjoy good melodramas with some touch of girliness and comedy. It is best appreciated by those who open up themselves to the values of family relationships and the realizations of growing old.