Skip to content
You are here
Home > Film/Art > Action > ‘Blade Trinity’ Film Review: The wrestle to the end

Wesley Snipes in his third movie as the iconic vampire Hunter Blade isn’t as “fanged” as the original.

“Blade Trinity” turns out to be a generic end to the “Blade” trilogy. This third installment directed by David Goyer wrestles to its end as a flashy, suspense-free visual reel substituting quick-paced humor for some chills.

The generation gap issues between Blade and the two Nightstalkers, along with the complications between Blade and Whistler, try to provide the story with some deeper characterizations. Unfortunately, the said attempt falls short with a sloppy script. The narrative flow relies pretty much on special effects.

Hannibal’s wit and comic punchlines try to draw in as much diversion amidst the heavy scenes of vaporized vampires, bombings, car wrecks, and glass breaking. Abigail’s sexy magazine poses tied up in countless slow-motion shots are clearly aimed at the male gaze. Female viewers also have their own eye candies with Hannibal’s abs and Drake’s (Dominic Purcell) pecs, especially with his engaging New Age costume as the new Dracula. 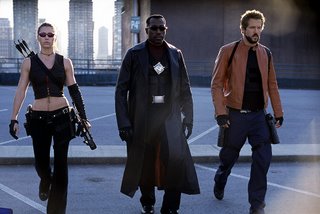 The ramped up techno soundtrack keeps the action scenes pumped up. Yet, the music video-style smashing in between the chasing scenes, wrestling scenes (mainly between Grimwood and Hannibal), swordfighting scenes (between Blade and Dracula), and “The Lord of the Rings”/Legolas-style archery scenes (Abigail using her high-tech weapons) give the movie some fast-paced, suspense-filled appeal that can be entertaining enough for its target audience.

The cinematography and production design almost always live up to the genre of the soundtrack. The special effects, including those of the weirdly funny and awkward vampire dogs, are reminiscent of visuals in “Species” and “Aliens,” but in a not so better light.

Both the adrenaline-pump and scare factors are not very effective. Shapeless fight scenes chopped into so many cuts lack form and rhythm. Most scenes offer typically expected outcomes.

Even vamp and Goth enthusiasts who would typically fall for such tale should not expect anything deeper than the physicality of fangs, annoying eyes, and black and leather-clad bodies.

Although the casting is generally fine, the treatment remains problematic. The human side often fluctuates in the storytelling. Many scenes are too shallow to evoke significant emotions to the audience. Deaths of some important characters are no different from the death of any unidentified vampire. Except for Blade, no striking victory for the audience gets felt even when a virus eats up pretty much all of the bad guys in an important scene. There are no high spirits for the feat. There is no much play of emotions — only the primary attempt to craft a glamorous music video-style flick.

Sound and musical score try to cover up the too choppy edits, just to maintain at least the same level of energy, hype, vim, and vigor as the previous “Blade” movies.

This final installment to the vampire franchise oversees opportunities that could have provided better characterization and more effective storytelling to the material. In any case, it may still be a watchable fare for those who simply want to feast their eyes on flashy visuals and hot vampire and human bodies.